Fall is full of simple pleasures here in Saint Louis, even when the Cards aren’t World Series champions. After all, Cardinals fans still got almost a full month of playoff baseball and, judging from history and statistics, can likely look forward to enjoying October games well before Cubs fans again experience the glory of post-season play. 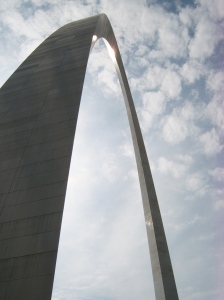 First off. I am truly thankful to live in a city. I grew up in a rural town that is now home to fewer than 3,000 souls. My town did not get a fast-food restaurant until the late 1990s, around the same time it got its first ATM. While those facts may make my hometown sound charming and Rockwellian to those who have never experienced the Arkansas Delta firsthand, I can assure you that it was not.

At the same time, Saint Louis is a city that showcases the seasons, something I rarely experienced in the Delta or in Dallas, a place that specializes in summer and the metropolitan area I previously called home. Dallas is city so short on trees that I believe most Dallasites have to take their seasonal cues from the Starbucks menu. After all, nothing says fall like a Pumpkin Spice Latte and highs in the 70s and 80s.

But, here in Saint Louis, a taste of fall can be found right outside my back door, no Starbucks necessary.